Streaming is now the way of the world, and there’s nothing like seeing talented actors telling great stories on our favorite platforms. This year, we’re getting talented actor Jaime M. Callica on two major streaming platforms, as he takes to BET+ in the new series, Ruthless, and will appear on Disney+ this summer in the film, Upside-Down Magic.

We had the chance to catch up with Callica about his latest projects, his charity work, and his advice for future actors.

The Tidbit: Thirty credits in just 3 years is quite a feat! What has that experience been like? Is there a role that stands out as a favorite?

Jaime M. Callica: Just under 4 years [chuckles]… It feels amazing to be able to look at the body of work my team and I have been able to compile in a relatively short period of time. My first couple of years felt like I really couldn’t book a job. In fact, I couldn’t! It took me a year to book my first credit after signing with my agency and then a year almost to the day separated my second credit. Which was really hard on the psyche because I was auditioning A LOT but booking next to nothing. So when I changed my process, work ethic and overall focus level, that’s when I started to book and book a lot. Christmas On Holly Lane was the movie I did where I played Doctor Jake Allen, and when I watched the movie, it was the moment where I said to myself: “you’re ready.” And I hit my managers up and asked for immigration lawyer referrals so that I could apply for my Visa to work in the States. So I’m really grateful to Director Michael Scott for that opportunity.

TT: Your next role is in Tyler Perry’s new BET drama, Ruthless. What can you tell us about this project?

JMC: You’re going to love it! It’s dark and completely different from anything you’ve seen from Mr. P (Tyler Perry). A man that calls himself “The Highest”- the second coming of Christ, runs what is essentially a sex cult that traffic’s children and drugs. My character is an Agent in the FBI and is called upon when an agent that had gone undercover in the cult goes dark. So between going in to find out guy and conflicts between him and his wife, you’re going to really love Brian who is a devoted husband and man of his country! 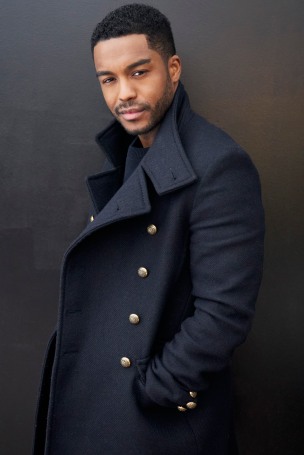 TT: This summer, we’ll see you in Disney Channel’s Upside-Down Magic. What can Disney fans look forward to from this film?

JMC: I loved playing Augustus in Upside Down Magic! Augustus is the father of Nory (the lead of the film) who as a small child, discovers that she has magic powers. It isn’t until she becomes a teen and is old enough to go to “magic” high school. What I love about this movie is that whole there is dark magic/conflict, it isn’t nearly as dark or scary as some of the other magic movies out. It’s suitable for small kids as well as teens and adults!

TT: We understand that when you’re not filming, you’re often spending your time giving back to organizations benefiting single moms and individuals with disabilities. Can you tell us more about the organizations you’re involved with?

JMC: My non-profit organization is called The Virgie Clamens Foundation and it aims to provide assistance to single mothers and mothers with disabilities. Of course, never turning away fathers in need, but seeing that I was raised by a single mom that also has health ailments, my primary motivation was toward giving back to mom’s that may need a hand. I’m currently revamping the website and all of the social media pages, so within a month or so, we’ll be at 100% and I couldn’t be more excited!

TT: You didn’t originally set out to act but were eventually bitten by the bug. What advice would you give to someone who just got the same bite?

JMC: If you REALLY love it… Start. Start and don’t stop. Because if you really put in the work, keep your mind and body strong and simply keep at it… You’ll win. I have this analogy that says: imagine I told you that your dreams or goals were on the other side of a large, rough body of water – what looks like the end of the water or the horizon is the finish line. If I told you that no matter how tired you got or how rough the waters were, as long as you KEPT SWIMMING you could not drown and you’d eventually get to the horizon aka your goals. But if you stopped, even for a moment, the current would pull you back to the shore and once you saw how much farther you now needed to swim again, you’d likely not get back in the water. Would you keep swimming or stop?