Skip to content
Amazon’s highly-anticipated series, HUNTERS, follows a diverse band of Nazi Hunters living in 1977 New York City. The Hunters discover hundreds of high-ranking Nazi officials are living among society and have a conspiracy to create a Fourth Reich in the U.S. The Hunters will set out on a bloody quest to bring the Nazis to justice and thwart their new genocidal plans. The series stars Al Pacino, Logan Lerman, Jeannie Berlin, and Zack Schor. 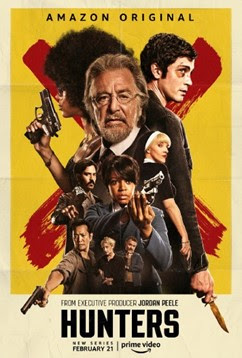 We had the pleasure of chatting with Zack about this current role, as well as what else he has on tap.

The Tidbit: What can you tell us about your soon-to-be-released project Hunters?

Zack Schor: Well, it’s a show about vigilante Nazi-hunters in New York in the 1970s. The “Hunters” are led by Meyer Offerman, Al Pacino’s character. I play the same character in a series of flashbacks during the Holocaust.

TT: What was it like to work with Jordan Peele?

ZS: Jordan Peele and Monkeypaw brought an extra level of attention to the project and that always attracts the best people. I was really lucky to work with some of the writers, directors, and actors in the industry. Along with a really talented crew, all that made for a really special working environment. We were all in it together trying to tell an important story that matters.

TT: What was it like preparing for this role?

ZS: It was intense. My grandparents are Holocaust survivors, so my character’s story felt very meaningful to me, and I wanted to do justice to that in my portrayal. So I took it upon myself to lose a bunch weight — 35 pounds — and I learned Polish for the role. I was really invested in playing my character, Meyer Offerman, as honestly as I could, so I buried myself in Auschwitz and Holocaust research, which is a dark place to live. The process of shooting was an emotional rollercoaster. Every scene we shot was incredibly emotional and we had the gift — and the weight — of unbelievably realistic sets, which was incredibly immersive.

As intense and challenging as it was, it was such a gratifying creative process bringing Meyer to life. Or rather….it was gratifying because of the challenges and intensity, not in spite of them.

TT: What other projects are you working on that you can tell us about?

ZS: I have a few different things on the horizon on both fronts, acting and writing. Nothing I can talk about yet, but I’m excited. We’ll see what takes off first.

TT: I understand you grew up in Chicago! In addition to entertainment, Chicago is the heart of The Tidbit. What’s your favorite part of the Second City?

ZS: I did! I love Chicago and I try to get home as often as I can. Apart from my family, a lot of which is still in Chicago, my favorite part is my sister’s restaurant, Split-Rail; the main restaurant is in West Town and they are also featured at the new Time Out Market in Fulton Market.